Students, who want to become a proud member of the Indian Defence system after their 10+2, should definitely apply for the upcoming NDA examination. The National Defense Academy (NDA) is the country’s first tri-service academy that trains young candidates for all the three forces (Army, Navy, and Air force) together. 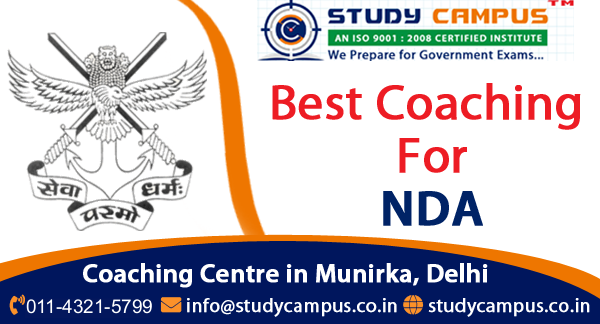 Highlights of our NDA course:

Our coaching classes located in the South Delhi area are considered to be top-notch in terms of our quality teaching methods and high success rate. We receive many inquiries from areas like Hauz Khas, JNU, Saket, Ber Sarai, Malviya Nagar, and many others regarding our offered courses.

Find best NDA coaching classes in Delhi, MunirkaIt is very difficult to clear the NDA exam conducted by the UPSC board. You will need to join a reliable NDA coaching in Delhi, Munirka that can prepare you in the right direction. Our coaching institute has been preparing students to clear the NDA exam with flying colors and has also managed to maintain a high student success rate.

Get prepared by a well-known NDA coaching in Munirka, South Delhi. We are result-oriented coaching classes.

Every applicant wants to clear the exam on his first attempt only, but how many can actually achieve it? You should get enrolled in the best classroom & online NDA coaching institute in South Delhi, Munirka, to channelize your preparations and efforts in the right direction. Our diligently prepared tutorial can help you understand each and every topic precisely and in an easy way. Most of our students have cleared the NDA examination with flying colors and you can be next on the list.

Below are the important dates of the UPSC NDA 1 and NDA 2; 2022 notification updates.

We have a pool of highly qualified and experienced teachers in our NDA coaching classes in Munirka, Delhi that makes sure each student is well prepared for the examination.

Our Other Top NDA Coaching Institutes Across India

What is the fee of NDA coaching?

There are different fee structures for different courses. Approximate fees can range from 30K to 60K per year.

Which coaching is best for NDA exam preparation?

Study Campus is one of the best coaching institutes in India grooming students in a favorable environment that helps students to score the best rank in the examination.

Are JEE and NDA syllabuses same?

No, the JEE syllabus includes chemistry, physics and mathematics questions which test your basic and problem solving abilities in science whereas NDA is a mix of general ability and mathematics test.

How can I prepare for the NDA exam?

Get thorough with the syllabus and strategy to start the preparation. Joining a coaching can also help you with your preparation. Right guidance from the experienced faculties will make preparation more effective.

How many students are selected in the NDA written exam?

The selection is tentative in nature as it depends on the number of vacancies. Generally, there are around 350 vacancies every year and 2.5 lakh aspirants write the exam wherein 500 approximately are called for an interview.

Which city is best for NDA exam preparation?

Dehradun is considered to be the best city for preparation for NDA. You can also relocate to Delhi or Mumbai.

What are the benefits of taking NDA coaching in Delhi?

It enhances your learning process and the environment in Delhi groom students by making them prepared to crack the examination. The coaching helps you with the basics which will allow you to serve your nation at a very early age.

Does 12th Percentage matter in NDA?

There is no such percentage criteria decided by the authorities for NDA examination. The aspirant should fall in the range of 16.5 to 19.5 years at the time of applying.

Is coaching necessary for NDA?

Coaching gives you the confidence and right guidance to crack the examination. If you are not confident enough then coaching is your way to go.